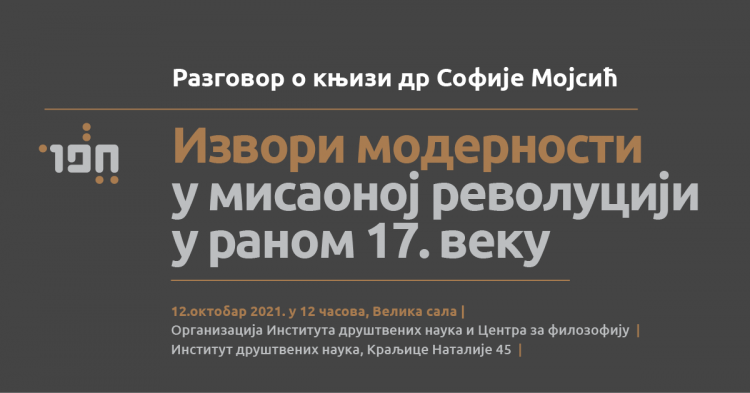 In her presentation as well as in her book, the author shows how and on what fundamental settings the modern epoch, modern philosophy and modern rationality in general were formed. The author carefully analyzes the key characteristics and current relevance of the philosophies of Bacon, Descartes, Hobbes and Pascal. In her presentation, she especially wants to emphasize why these philosophies are so important to us today in the 21st century. It highlights all the great enthusiasm and courage, combativeness and optimism of a Bacon at the beginning of the modern scientific and philosophical revolution in the 17th century and his belief and emphasis on how much the modern rationality he was building significantly influenced the formation of better and more moral people. with which many of our contemporaries are oversaturated. It further emphasizes Descartes 'key contribution to the conception and shaping of the modern notion of spirit, which primarily implies critical self-separation and (self) critical (self) reflection (reason), Hobbes' insistence on the key importance of passion - among other things - for human life. the philosophical and intellectual one, and finally shows how much Pascal insists on many aspects of modern man and the modern Christian religion that can rightly be called demonic. In these basic characteristics, she sees how much their authors correspond to our modernity, which is often forgotten.

Sofija Mojsić was born in Kosovska Mitrovica in 1963. She graduated, obtained her master's degree and doctorate at the Faculty of Philosophy in Belgrade, at the Department of Philosophy. She has published the following books: Kierkegaard's Thought Path (Mali Nemo, Pančevo, 2008), Kant and Hegel as Thinkers of Modernity (Mali Nemo, Pančevo, 2009) and Sources of Modernity in the Thought Revolution in the Early 17th Century (Mali Nemo, Pančevo, 2021) . She was also a contributing author in the Encyclopedia of Fear (Official Gazette, Belgrade, 2015). She has translated the following books from English: F. Coppleston, Russian Religious Philosophy (Plato, Belgrade, 2003), A. McIntyre, The Search for Virtue (Plato, Belgrade, 2006) and Č. Taylor Sources of Self (Akademska knjiga, Novi Sad, 2008). Together with Dr. Mirko Blagojević and Dr. Marinko Lolić, she edited the collection of papers Belief and / or Knowledge (Belgrade, 2016). She has published several scientific papers in professional periodicals. She worked at the Institute of Philosophy of the Faculty of Philosophy in Belgrade, the Institute of Philosophy and Social Theory in Belgrade and in the company "Svetlost".