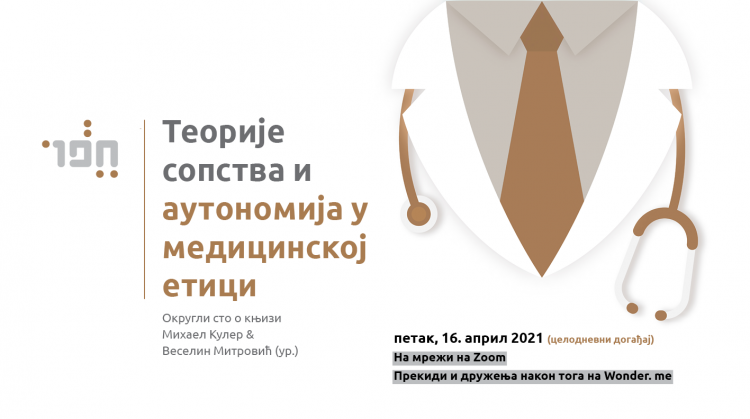 On April 16, starting at 9.10 am, a Book Symposium on Michael Kühler & Veselin Mitrović (eds.): Theories of Self and Autonomy in Medical Ethics, International Library of Bioethics 83, Kam: Springer, 2020.

The meeting was hosted by theAcademy for Responsible Research, Teaching, and Innovation (ARRTI)at the Karls-Ruhe Institute of Technology (KIT) and the Institute of Social Sciences, Belgrade.

The online event, which was attended by 18 participants from five different countries (Serbia, Germany, the Netherlands, the United Kingdom and the United States of America), was held throughout the "Zoom" platform, with informal gatherings at the end of the meeting on the "Wonder.me" platform.

In addition to the established plan for commenting on selected chapters, with the participation of the authors of the chapters and commentators, additional guests were included in the discussion.

Mr. Chris Wilby from the Springer publishing house also addressed the gathering, who presented the possibilities of publishing with an emphasis on open access to publications, and gave a basic overview of the citations of manuscripts published in the field of humanities and social sciences.

Having in mind the long-term cooperation of the authors of the book, the meeting confirmed the already started work on another joint publication which, as a logical continuation of the previous one, would deal with the challenges and issues of paternalism.

In addition, the extremely rich and useful discussion and positive reactions from the meeting led to the conclusion that it would be useful to organize the next meeting which would be a continuation of the ongoing debate.